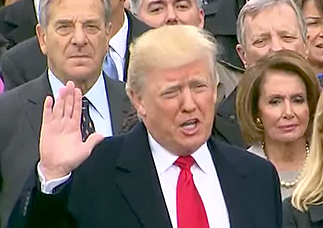 Bring on the silver bracelet cuffs

All eyes are now on Attorney General Merrick Garland, the way they were once on Robert Mueller. And now, just like then, hope springs eternal that we will finally get the closure that only a Trump family perp walk can bring.

But we are no longer the innocents we were during Mueller time. Then, we believed that a team of brilliant prosecutors were expertly and relentlessly winding together multiple evidential threads of corruption, abuse of power, obstruction of justice, financial wrongdoing, criminal acts and outrageous nepotism.

We were prepared to just sit tight; confident we were about to see the book thrown at Trump. But after 22 months of furtive investigation accompanied by frenzied media coverage, and unrestrained punditry about how Trump was going down, Mueller punted his findings and left the building, leaving behind a trail of legal ambiguity, shameless political maneuvering by Trump’s allies that enabled Trump to claim exoneration, and an incredulous public.

That was our first inkling that America’s system of checks and balances may be no match for a man as corrupt, shameless, and unhinged as Trump. Now he was only further emboldened to defy laws and ethical norms in pursuit of graft and power.

The horror that was Trump’s presidency continued to unfold unabated over the next two years. Attempts to hold him accountable have all but fizzled. He’s the first U.S. president to be impeached twice, first for extortion in the Ukraine matter and second for incitement of the Jan. 6 insurrection. In both cases, the GOP-led Senate voted to acquit.

The 2020 presidential election was a shocking spectacle of dishonest campaigning, blatant attempts to extort and suppress votes, demented conspiracy theories of voter fraud and Trump’s incessantly repeated treasonous lie that the election was rigged. While the courts repeatedly threw out Trump’s claims of voter fraud, he continued to foment the anger of aggrieved and gullible followers. When thousands of rioters stormed the seat of government on Jan. 6, Trump gleefully watched from the White House, refusing to put an end the violence. It took four hours to secure the building so that Congress could certify Biden’s victory.

We are now six months into a bipartisan Select Committee investigation to determine how the Capital riot came together and who is responsible. At the same time, the U.S. Dept of Justice has been conducting its own criminal investigation that has, to date, led to 738 people being charged and/or convicted. But by now, American citizens have grown skeptical and impatient. They are losing faith in the ability and willingness of the justice system to take matters to their ultimate conclusion and go after the masterminds at the top.

Aware of mounting public disillusionment and outrage, Attorney General Garland recently stepped forward to publicly offer reassurance of his resolve to, without fear or favour, uphold the law.

“The actions we have taken thus far will not be our last,” he said. “The Justice Department remains committed to holding all January 6th perpetrators, at any level, accountable under law — whether they were present that day or were otherwise criminally responsible for the assault on our democracy.”

Let’s not forget that Jan. 6 is but one of multiple active investigations into Trump and his enablers. He faces a plethora of lawsuits and investigations (eighteen at last count), both civil and criminal, related to alleged shady business dealings, fraud, tax litigation, defamation and sexual assaults.

In 2004 Martha Stewart was sent to jail for five months and served another six months on house arrest for a questionable stock transaction. What’s wrong with this picture? Will Trump, cronies and kin ever get their due? Will closure ever come? That will require a slew of silver bracelets engraved ‘got you, you bastard’ and a perp walk to sell tickets to.

Are you up for it Merrick Garland?