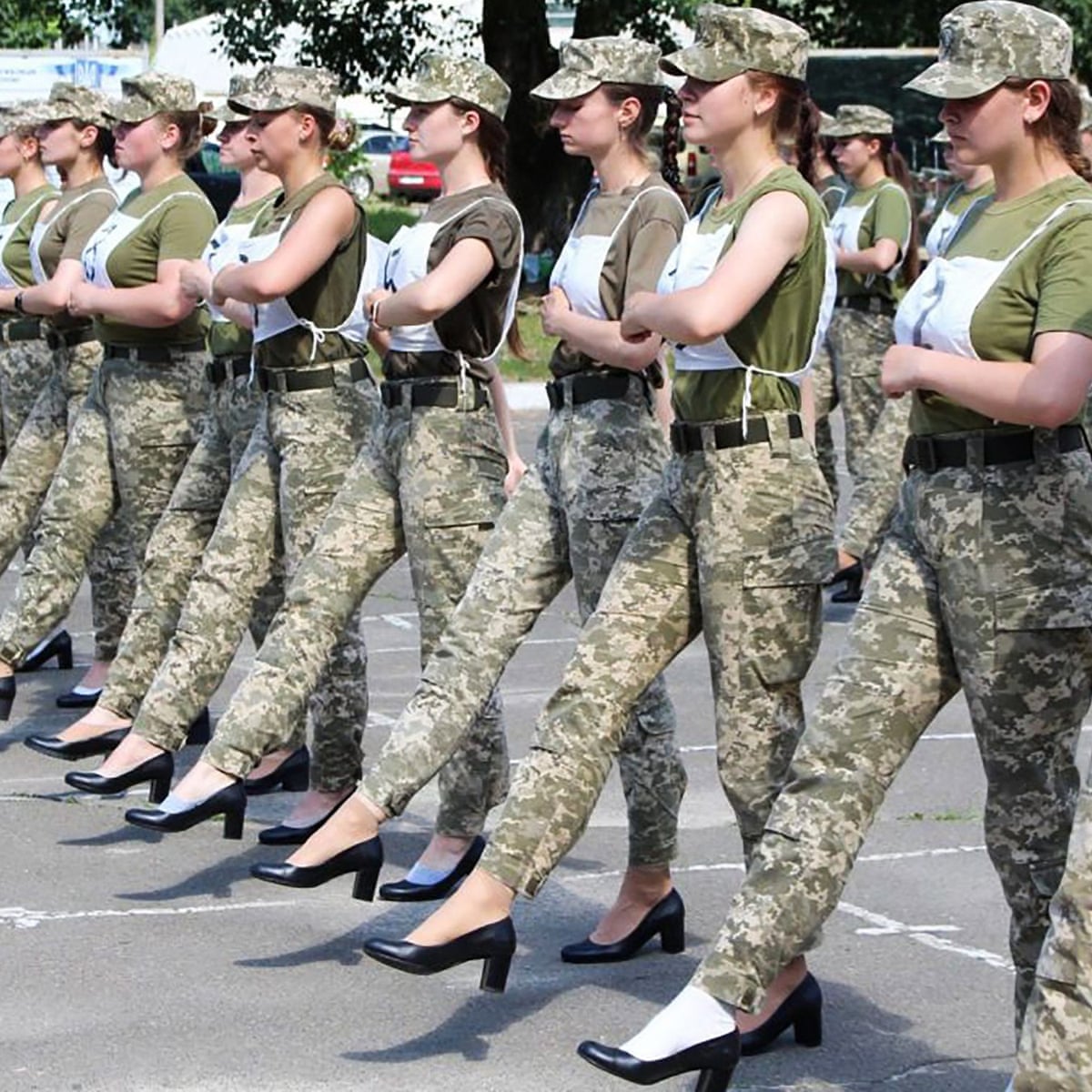 Ukrainian defence officials tried to add Barbie Soldier to the collection that already includes Barbie Astronaut, Barbie Pop Star and Barbie Dentist. Some top military brass got the notion to outfit women soldiers in black pumps instead of regular army boots. The toe-cramping, short-lived marching drills were said to be prep for a military parade to mark three decades of independence from the Soviet Union.

Official photos of the soldiers practising in heels were met with outrage. “It is hard to imagine a more idiotic, harmful idea,” politician Golos party member Inna Sovsun told The Guardian. [Ukraine’s] women who are fighting like men for their country “do not deserve to be mocked.”

In one way or another, women world-wide have contributed enormously to war efforts as well as anti-war movements. Today, in Canada, about 15 per cent of the active military is comprised of women. Those numbers have plateaued as reports by soldiers of gender discrimination and sexual assault have escalated.

“The nature, extent and human cost of sexual misconduct in the CAF remain as debilitating, as rampant and as destructive in 2021 as they were in 2015,” says former Supreme Court Justice Morris Fish in his recent independent review of the military justice system.

The entrenched military culture that sustains abusive and violent behaviour toward female members has been on full display with recent revelations of sexual assault and misconduct by military leaders.

Chief of the defence staff Gen. Jonathan Vance resigned earlier this year after being accused of inappropriate behaviour by two female subordinates. He has now been charged criminally with obstruction of justice for allegedly pressing a woman to make false statements. Some serious bro’ bonding came to light when it was discovered that Vice-Adm Craig Baines golfed with Vance even as he was under investigation. Vance’s successor Admiral Art McDonald, who also quit amid allegations of sexual misconduct, has now been exonerated by a military police review. Major General Dan Fortin, who played a leadership role in Canada’s vaccine rollout, was also investigated by military police and recently charged with one count of sexual assault.

In his review, Justice Fish condemned the requirement for complainants to report offences through their chain of command. Many outside the military agree that it’s an antiquated practice that perpetuates the feel of an old boys’ club protecting its own and leaving accusers subject to reprisals, ostracization and pressures to withdraw complaints. Vance is alleged to have told one female soldier that he “owned” the military police.

It wasn’t until the mid-2000s that female soldiers won the right to serve in combat. Many now routinely fight alongside men on the ground, in air and at sea or are in training to do so and risk their lives for a larger cause.

Forget about how men feel about this development. Women themselves intensely disagree over the merits of the sisters-in-arms movement. And strains of feminist thought on the subject fall into several camps.

Some contend that women won’t be seen as true equals to men unless able to serve in all societal roles, including as soldiers on the front lines. They welcome increased military-related jobs opportunities for women in both pubic and private spheres. Another brand of feminism has fought against a push to integrate women into the military, seeing it as society’s ultimate institutional expression of violence and control with core values and a perspective that can lead to war.

It’s uncertain what the future holds for women in the military. While the number of female soldiers on the ground has been static, the number showing up in top leadership roles is remarkable. Today we see women leading public and private organizations throughout the industrial military complex, as heads of global defense contractors and in vital government positions. In the wake of multiple resignations, Canada has promoted a flurry of female generals, including Brig.-Gen. Krista Brodie to replace Fortin as head of the vaccine rollout. Also notable is the appointment of Commodore Josée Kurtz as the first woman to command the Royal Military College of Canada, where there is perhaps no greater opportunity to inculcate values in a new generation of soldiers and help establish a non toxic military culture.

But does this feminizing trend portent a new direction for the military? Or does it lend legitimacy and embolden the system to ignore progressive calls for a re-imagining of the military’s role in meeting today’s global challenges. Greater gender diversity may have a disrupting effect on cultural norms and values. And that may hopefully lead to new proclivities away from brinkmanship and toward compromise and diplomacy, away from the dangers of tribalism and toward international oversight, and away from battle and toward peace-keeping and disaster relief.

Our world, made all the more volatile and dangerous by climate change, will need unmatched military leadership and battalions of the most committed and unified soldiers to help with the expected upheaval, displacement and human tragedy.