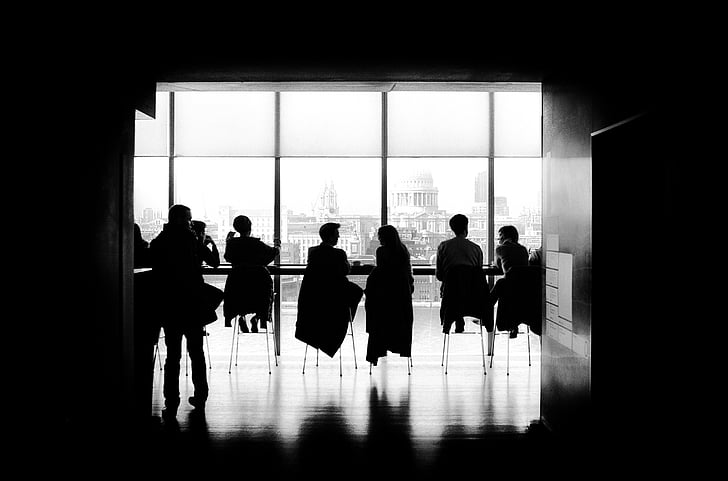 Justice Sonia Sotomayor is the most interrupted member of the United States Supreme Count. Vice presidential candidate in the 2016 election Kamala Harris was interrupted twice as often as she interrupted Mike Pence during their debate. The only woman on a panel of theoretical physicists was interrupted incessantly, even when explaining her own theories of the universe, until an audience member, beside herself with frustration, stood and yelled. Let. Her. Speak. Please. (to thunderous applause).

If these eminent women at the highest echelons of society are interrupted before finishing a thought, how the heck are the rest of us supposed to get a word in edgewise.

The chronic issue of dude intrudeness, which has been documented and studied for decades, has again come to the fore. Justice Sotomayor, speaking at a diversity and inclusion conference this month, noted that the court has changed its format for oral arguments to prevent interruptions of the female judges by the male judges and lawyers.

She said the recent changes came about in light of studies showing the prevalence of (my words, not hers) rude dude syndrome. The new format came into effect when the Supreme Court returned for in-person oral arguments in early October. Along with the free-wheeling question session open to all judges, it gives each member time to pose questions on a one-by one basis.

While the phenomenon of female interference in the workplace is well known, it was research specifically related to SCOTUS interruptus that eventually brought the issue home for the high court.

Any thought that the troubling trend would plateau over time as more female justices were added to the court has proven wrong, according to the study. In 1990, when Justice Sandra Day O’Connor was the lone female on the high bench, the rate of male interruptions was 35.7 percent. Twelve years later, two female justices with the addition of Justice Ruth Bader Ginsburg saw the rate climb to 45.3 percent. By 2015, once Justice Elena Kagan was appointed, 65.9 percent of all interruptions were aimed at them. “I was blown away by the amount of times the female justices were interrupted by their male colleagues…and the situation only seem to be getting worse, study researchers Dylan Schweers and Tonja Jacob commented to The Daily Northwestern at the time.

Female students, employees, board members and others engaged in group discussions that include men, are all too familiar with this enraging gender dynamic. And being constantly interrupted goes hand in hand with another favourite guy move, artfully known as ‘bropropriation’ or ‘hepeat.’ This classic manoeuvre, amusingly documented in this online video produced by This Hour Has 22 Minutes, occurs when an idea put forward by a woman is ignored and then applauded when later repeated by a man. Both practices are commonly high on the agenda of professional women’s workshops (i.e., How to respond when interrupted without sounding like a whiny bitch. How to recover gracefully when your brainchild is ignored but wins a standing ovation for your colleague Pete Repeat.)

A strategy adopted by the women’s advisory team for former President Obama, fed up with incessant interruptions and idea snatching by their male colleagues, created a counterattack measure they dubbed ‘amplification.’ The women would repeat and give credit to ideas proposed by another woman as soon as they came forward. This ensured proper recognition for the originator of the idea and pre-empted any man in the near vicinity from pouncing on it.

On-line advice and tips sheets for handling these types of transgressions in the workplace abound.  It’s regrettable that concerted measures to ensure basic fairness are necessary but the enduring nature of the problem requires women to strategize solutions.

Who knows whether men who engage in this type of behaviour do so consciously or unconsciously? Various reasons have been put forward to explain why men interrupt, a few verging on a blame- the-victim rationale. Some apologists point to the fact that a woman’s higher voice tone or more diplomatic, softer approach in framing statements makes her contributions to discussions less definitive sounding.

It seems at least equally convincing that this ubiquitous challenge for women is a power move pure and simple. Someone perceived to have less status or influence within an organization is more easily messed with.

Anyone who doesn’t find the countless accounts of women everywhere to be evidence of the reality of the problem may find one man’s experience more compelling.  Dr. Ben Barres, a professor of neurobiology at Stanford University School of Medicine who transitioned from female to male shared an authoritative observation.

“The biggest difference I have noticed is that people who do not know that I was a woman treat me with far more respect. I can even complete a whole sentence without being interrupted by a man.”