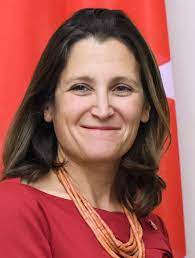 The federal government’s wonder woman has caught the wandering eye of Canadians. Chrystia Freeland, the deputy prime minister who doubles as Finance Minister, has proven to be capable and unflappable with even the most challenging political assignments.

As the same time that Justin Trudeau is out front and taking the hit for government missteps on issues like SNC Lavalin and the pandemic, Freeland has been carrying on the business of governing and proving her chops on the national and international political stage.

Now, a new poll conducted by the Globe and Mail shows Canadians have been paying attention. The Nanos Research poll finds that Freeland currently tops Trudeau as the preferred choice for leader of the Liberal Party.

Trudeau wins points for recognizing talent and positioning Freeland to be his successor. Currently, Freeland is playing a key role in Canada’s response to the Russia-Ukraine crisis. Three years ago, she successfully led the Canadian team re-negotiating NAFTA with the U.S. wearing her Keep Calm and Negotiate T-shirt and winning what many of us see as high praise from Donald Trump.

Who but a few wouldn’t like our next prime minister to be Trump’s idea of a “nasty women”.