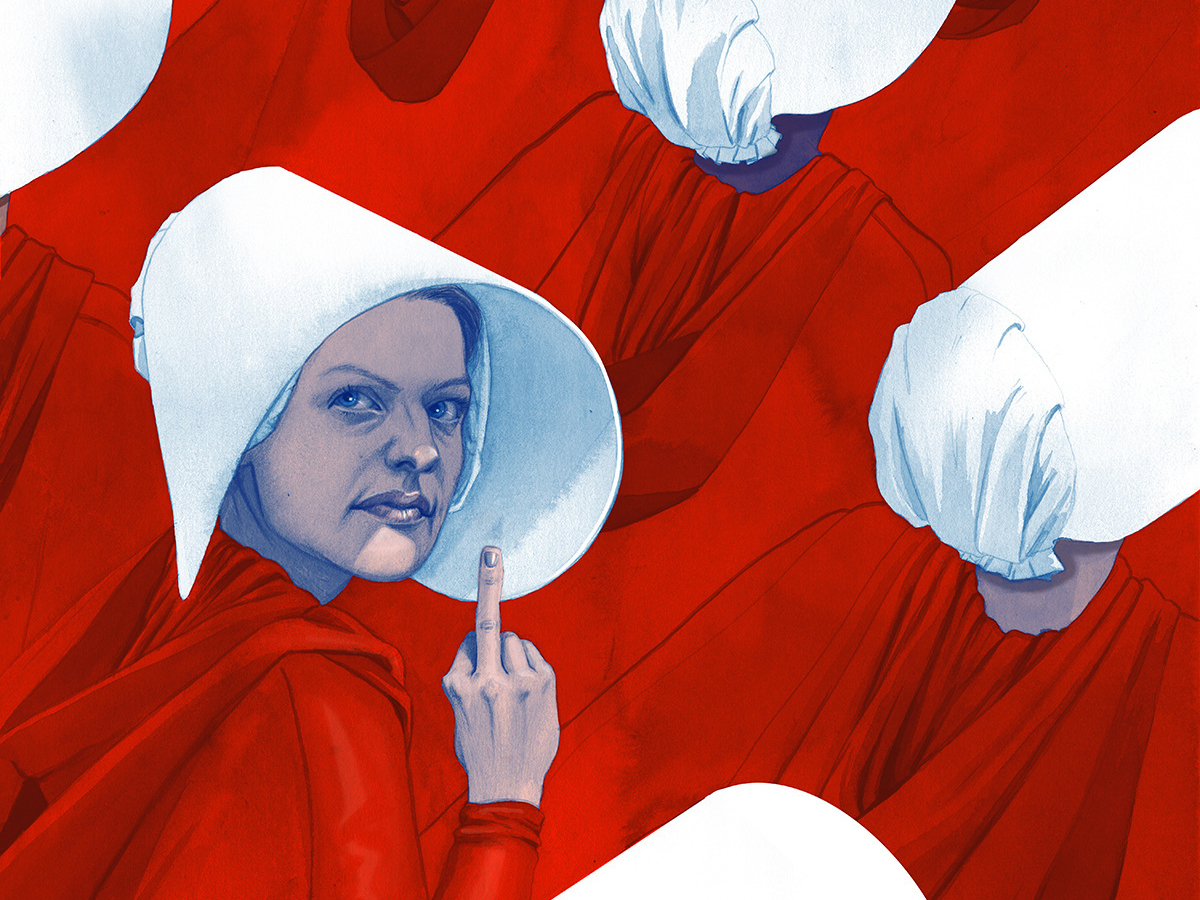 Just when post-Roe versus Wade generations of women began to think of themselves as sovereign beings, Margaret Atwood waved a red robe from her literary pedestal.

Canadian women have not just been complacent about abortion rights, we’ve been smug. Even in the U.S., where increasing numbers of women are at imminent risk of losing one of their most fundamental freedoms, many are in denial.

Abortion activists have recognized the mounting threat and tried to sound the alarm, but women generally have been preoccupied with more immediate demands on their attention. That began to change with growing awareness that Trump continues to hold in thrall almost half the country and takes every opportunity to stoke their radical anti-abortion flames.

Atwood’s The Handmaid’s Tale, published in 1985 and serialized for television in 2017, portrays a theocratic dictatorship that strips women of rights and turns them into breeding machines. Many read the book or watched the series as disturbing but mythical entertainment. Others sensed the prescience of the tale.

Sure enough, over the last two decades, anti-choice activists quietly concentrated lobbying at the state level, and with considerable success. But it was the election of Trump as president that brought the abortion wars back to prime time. His bigotry and misogyny emboldened anti-abortionist, white supremacist, and ultra right wing Christians – all with a shared, primary agenda of ridding women of reproductive freedoms. How better to exert economic and social control over women and ensure there are enough white babies to halt an ascendent immigration population.

The day after Trump’s inauguration, in a moment of clarity, an unprecedented number of women across the globe, including thousands of Canadian women, marched in the world’s largest single day demonstration to signal fierce resistance to any erosion of women’s rights, including racial equality and reproductive freedom. By now, the imagery of the Handmaid’s Tale — the loose red cloaks and bizarre horse-blinder bonnets – had become standard garb at abortion protests.

Since then, anti-abortion sentiment has begun congealing into laws. In recent years, more than 40 states have enacted abortion-related legislation, most of which has decreased access. Some states are adopting the so-called heartbeat bill, which bans abortion at six weeks, when many women aren’t even aware of a pregnancy. They might as well ban abortion outright.

At the same time, there has been a conspicuous melding of hearts and minds between ultra right-wing Christians and U.S. Catholic bishops, with their own industrial strength brand of patriarchy. In June, the US Conference of Catholic Bishops voted to ‘clarify’ the church’s position on who qualifies (adheres close enough to Catholic doctrine) to receive the holy sacrament of communion. The bishops only realized they had stepped in dogma doo do after adopting a policy that would ban pro-choice President Joe Biden, the country’s second Catholic president and devout church-goer, from receiving communion. The bishops quickly backtracked.

The worst fears of the majority pro-choice population were realized two weeks ago when the U.S. Supreme Court denied a request from Texas abortion providers to freeze a law banning abortion after six weeks. The court refused to interfere even though the Texas law violates Roe v. Wade, which legalized abortion across the US up to around 24 weeks of pregnancy.

A particularly chilling aspect of the law is how it allows private citizens — known as “the Eyes” in Atwood’s Gilead — to sue abortion providers and anyone else who helps a woman obtain an abortion, even if merely offering a ride to a clinic. Speculation about what kind of lift anti-abortionists would get from Trump’s Supreme Court appointments, Amy Coney Barrett and Brett Kavanagh, has now been settled. While the President and U.S. Dept. of Justice vow to uphold women’s abortions rights, many fear the approach taken in Texas will become a legal template for other anti-abortion red states.

Attuned to the threat

Compared to the US, Canada is a pro-choice mecca. The federal Liberals have had no qualms about linking funds for health care to the provision of family planning and abortions services. Even Conservative leader Erin O’Toole insists he’s pro-choice. But the anti-abortion movement remains strong and is concentrating its efforts on limiting access to abortion services. While abortion isn’t illegal here, neither is it readily accessible in all parts of the country. New Brunswick, for example, is being accused of violating federal law and the Charter of Rights and Freedoms by refusing to fund non-hospital abortions. As part of this election campaign, Trudeau has promised to adopt regulations under the Canada Health Act to eliminate any doubt that Canadians, wherever they live, have the right to publicly available sexual and reproductive health services.

With the mobilization of a fundamentalist Christian, ultra-right movement on both sides of the border, women everywhere are tuning into the threat of losing such a fundamental right. Says Offred of Atwood’s The Handmaid’s Tale, in a distinct moment of clarity: “It was true, I took too much for granted; I trusted fate, back then.”

Blessed Be illustration courtesy of Zoe van Dijk at www.zoevandijk.com