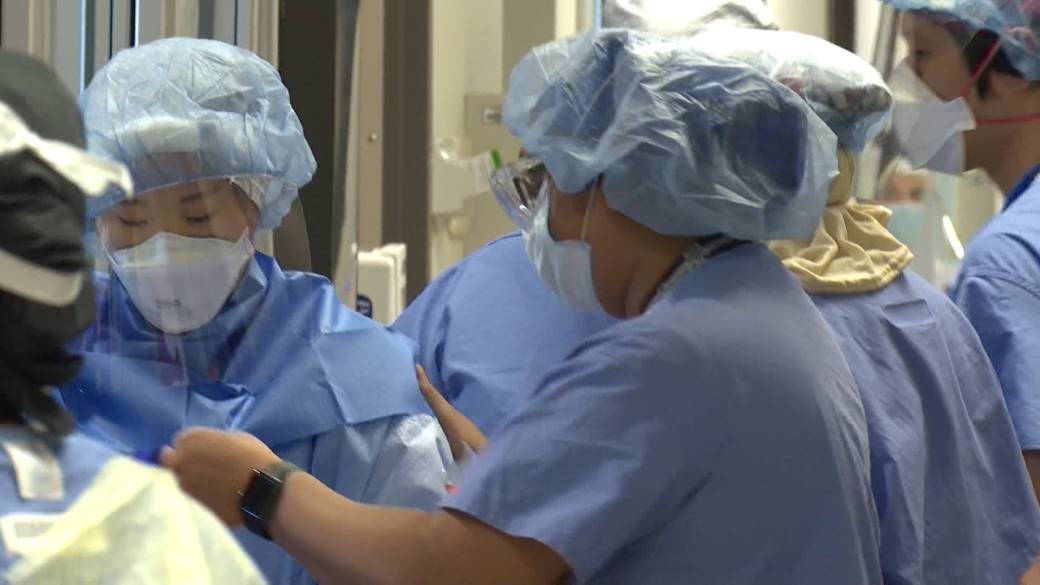 Nurses offered 1 per cent for giving 200 per cent

She is well into overtime hours again and doing three jobs instead of one because of a rapidly dwindling workforce. Much of her efforts go toward trying to help save the lives of unvaccinated patients dying from COVID-19. When she leaves for home, angry strangers with signs block and harass her with threats and obscenities.

The revolting scenario of nurses and other health-care workers caught in the middle of a crazed political crusade by anti-vaxxers is playing out at hospitals and clinics across the country. Could there be a more morale-destroying running of the gauntlet at the end of an exhausting shift?

Add to the mental health effects of this corrosive and misguided persecution,

–the ever-present terror that she could spread the infection to her child, spouse, or aging parent

–the worry about whether protective equipment is available and up to the task of fending off air-borne disease. (Two weeks ago, a judicial view dismissed a demand by the Ontario Nurses’ Association (ONA) that their members get better access to protective equipment. As of mid August, about 95,000 Canadian health-care workers had been infected with COVID-19.

–the burn-out but unwillingness to abandon already overworked colleagues

–fear of physical violence. (Last week, media reported that a Quebec man repeatedly punched a nurse in the face and knocked her down after she vaccinated his wife against Covid-19 without his permission)

But the mental and physical toll on nurses (more than 90% female in Canada) doesn’t end there. Who can begin to tally the emotional cost of being the only one there to hold the hand and hear the dying words of a mother or father quarantined from family?

Even nurses have their limits, especially after serving on the frontlines for 20 months of the worst pandemic in over a century and when there is faint hope of respite on the horizon.

Although most Canadians have embraced public health measures and can boast one of the highest vaccination rates worldwide, case counts, and hospitalizations are on the rise again in most regions of the country. The infection rate continues unabated in Alberta, which is close to four times higher than the national average. Other provinces such as Saskatchewan, New Brunswick and PEI are seeing a surge of cases. The rest of Canada is being told to remain vigilant.

Since the COVID takeover of health-care facilities, political leaders have extolled nurses as heroes, making constant public exclamations over the depth of the courage and commitment they have shown throughout the pandemic. “You are absolute champions, making a difference in the lives of countless patients and families,” Premier Ford tweeted.

Now for reality bites. In mid 2020, Ford announced that nurses are being offered a one per cent increase in salary (which translates to a loss of earnings once inflation factors in).

Nurses were outraged, as much by the proposed dollar figure as by the blatantly discriminatory system under which their compensation is determined.

In 2019, the Ford government passed Bill 124, legislation that caps wage increases for some professionals to a maximum of one per cent. Registered nurses, nurse practitioners, and health-care professionals are amongst the hardest hit by the law.

Now wait for it. The wage ceiling doesn’t apply to other public-sector workers in male-dominated occupations such as police officers and firefighters.

“It is difficult to overstate how deeply damaging and insulting this law is to our incredibly courageous front-line RNs and health-care professionals,” says ONA President Vicki McKenna.

This legislated discrepancy in wage-earning potential between male and female-dominated professions is wrong. It’s also inexplicable for a province, like most others in Canada, that is facing a ‘mega’ health-care system crisis as nurses, burned out and disillusioned, flee the system. There are more than 16,000 vacancies in Ontario alone, according to the Canadian Federation of Nurses Union.

Does no-one take nurses seriously? For more than ten years, the Canadian Nurses Association has warned of a crippling national shortfall of up to 60,000 fulltime nurses by 2022. With COVID, the predictions have become even more dire. Job vacancies in Canada’s health-care sector jumped by 57% to 100,300 in the fourth quarter of 2020.

While there has been plenty of talk about the need to hire more nurses, little is being said about retention. Where are the bonuses for those nurses who have persevered throughout the crisis? If there are no nurses left to train the new ones coming out [of nursing schools], then there’s no profession left,” one nurse remarked to The Toronto Star at Monday’s Queen’s Park rally. Once COVID subsides the health-care system will face a tsunami of medical needs it has moved to the back burner. Toronto’s Sunnybrook Hospital predicts that about 5,000 procedures have been delayed because of COVID.

And why wouldn’t nurses, who don’t have the right to strike, consider their options? Job market forces are smiling on nurses these days. The offers from desperately short-staffed hospitals and clinics from across Canada and the U.S. are generous and often include lucrative signing bonuses of up to $75,000.

The undervaluing of nurses is a global phenomenon. An independent study in the UK last year got right to the crux of the matter when it “unequivocally” ascribed most of the problems and challenges facing the nursing profession to its  historical identity as a female-dominated occupation. “The longstanding view that care is a naturally feminine skill or characteristic overlooks and devalues the high levels of skill and professionalism nurses have,” the study states. The Ontario public knows this to be true. A new study conducted during the third wave of COVID-19 found that eight in 10 of those surveyed felt nurses have been undervalued during the pandemic.

The clanging of banging pots on balconies has dimmed. But it’s clear that the people of Ontario and Canada are aware, better than they ever have been, what a critical role nurses play in the overall health-care team.

How can Ontario show them the respect they deserve?

Start listening to independent nursing and other health-care experts who have long been cautioning about impending staff shortfalls. Long-term planning to ensure a viable health-care system is sorely needed. The construction industry has a federally funded forecasting agency that’s the envy of nurses, one nurse told CBC Radio.

Develop a meaningful and generous package of monetary and professional incentives for nurses that will convince them their profession is as highly regarded and valued as any profession that just happens to be pre-dominantly male.