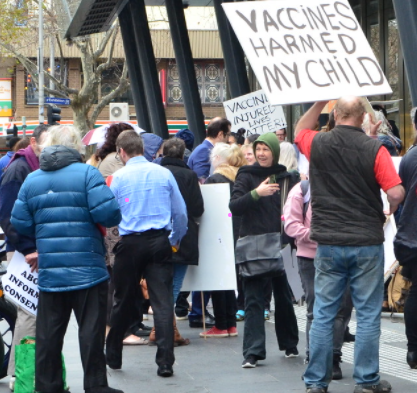 Running against the herd

The fraught question amongst the enlightened double-vaccinated: Who are these (expletive) crazy people?

Justin Trudeau, who anti-vaccine protestors have pelted with gravel on the campaign trail, finally lost it this week when his wife was called a whore with his impolitic taunt ‘isn’t there a hospital you should be going to bother right now?’ Assembling in front of hospitals and schools to block traffic and ambulances and harass emergency patients and children has become a favored anti-vaccine move.

As of this week about 27 per cent of the population in Canada and more than 30 per cent of the U.S. remains unvaccinated. This is the yet – maybe never – to be poked populace that sustains the virus in its quest to infect, spread and mutate and prevents the rest of us from getting past this nightmare.

There is an important first step in attempting to fathom the mindset that leads people to reject a rigorously scientifically proven, easily accessible and free solution when faced with the risk of catching a debilitative, possibly fatal virus and spreading it to loved ones and others. And that is distinguishing between the rationale/verging-on-rationale from the absolute nutters.

The “unvaccinated” decline the treatment for a variety of reasons informed by life circumstances and experiences. They are or are possibly allergic; they have another medical condition that prevents them from getting vaccinated; they are part of a group that has had the historical experience of being abused by experimenting medical researchers; or they strongly believe that through wellness practices they can naturally build a formidable immune system that will see them through.

“Anti-vaxxers”, on the other hand, are misinformed, conspiracy theorists with laughably bizarre ideas about who is out to get them and how, and a tendency to harass and assault health-care workers, educators, pharmacists and others they deem traitors to their cause.

Myths include that vaccines cause infertility, kill more people than the virus and are being used by Bill Gates to inject trackable microchips into the world’s population. Republican West Virginia Governor Jim Justice  eloquently expressed the extreme frustration of the vaccinated over an outright rejection of scientific evidence. “For God’s sakes a livin’, how difficult is this to understand.”

Despite their vehemence, it’s debateable just how committed anti-vaxxers are to a specific cause. Their behaviour and tactics are all too familiar, having been seen in various domestic terrorist groups. There is known interplay between anti-vaxxers and other terrorist groups. This includes the Proud Boys, newly focused on sabotaging efforts to quell the pandemic and the so-called “groyper army” comprised of white nationalists and far-right activities who believe  vaccination is akin to “gene therapy” that enables the government to “own you”.

Last month, the U.S. Dept of Homeland Security, recognizing the combustible nature of this convergence of interests, warned of elevated threats posed by what they characterized as grievance-based violence. “These extremists may seek to exploit the emergence of COVID-19 variants by viewing the potential re-establishment of public health restrictions across the United States as a rationale to conduct attacks,” the DHS bulletin said.

This seemingly generic approach to ‘cause cé·lè·bre’ suggests a floating rage ready to land on any high-potential source of disruption.

Researchers find that anti-vaxxers have an extraordinary attraction to conspiracy theories of any kind. In the journal World Affairs, Zachary Goldberg and Sean Richey document a strong connection between anti-vaxxer beliefs with, for example, convictions that Obama is a Muslim and that 911 was an inside job. “All three (beliefs) are negatively correlated with political trust, political knowledge, education, and a positively correlated with authoritarianism,” they note.

The durability of vaccine skepticism relates as well to the tendency of followers to trust in gut belief as opposed to knowledge in forming attitudes, says social scientist at Loyola University Chicago Jeff Huntsinger. “At the root are these moral intuitions — these gut feelings — and they are very strong. It’s very hard to override them with facts and information. You can’t reason with them in that way, he told The New York Times.

This revelation is said to explain why efforts to change minds through information and education about vaccines has had little effect and supports government moves toward mandating measures and sanctions aimed at curbing the spread of COVID.

Another explanation for the resilience of the vaccine movement is what psychologists call the “sunk cost fallacy,” which compels people to cling to a belief system no matter how credibly disproved. “Even though we know, in our guts, that our adherence is based on faulty information, our need to save face keeps us firmly committed to the path we publicly set ourselves on,” says American psychologist and author Doreen Dodgen-Magee.

The vaccine resistance movement has historically been led by white, lower to middle-class agitators and has strong racist origins. In her book Medical Apartheid, US writer Harriet A. Washington documents how frequently Black communities, often without their knowledge or consent, were recruited for medical research to test new medical treatments and vaccines. In Canada, whether Indigenous children in residential schools were vaccinated against disease was at the total whim of federal officials or religious entities running schools, note Ian Mosby and Jaris Swidrovich in a recent article in the CMAJ.

Women are clearly amongst those who have been radicalized, largely through on-line misinformation, but the nature of their contribution to various domestic terrorist movements has been unclear. Recent research by sociologists Mehr Latif and Kathleen Blee outlines roles that far-right men assign to women, including that of “mothering” and providing sexual gratification to male members while often participating in violence themselves.

So, it turns out, anti-vaxxers are largely just one more offshoot of the aggrieved white male syndrome. In his book Angry White Men: American Masculinity at the End of an Era, masculinity expert Michael Kimmel notes that the election of Donald Trump marked the reawakening of white men’s panic of being left behind and made clear that “the white American male voter is alive and well and angry as hell.”