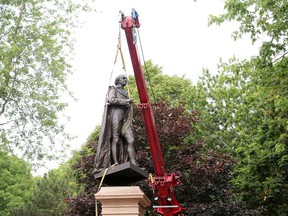 ‘Statues’ of limitation: Time is up

The past year has seen serious cracks forming in the marble infrastructure that embodies white male heroes of a glorified past.

Statues commemorating men with a dodgy history are coming down around the world, including where I live in Kingston, Ontario.  Our city council voted this summer to honor the voices of Indigenous people by removing the statue of Sir John A. MacDonald from his pedestal in our city park. It was a painful moment of reckoning for some residents of Kingston, home town to the man known as Canada’s father of confederation and creator of the country’s disgraced residential school system.

Also being boxed up in many places are the ubiquitous marble busts, plaques, and portraiture of a newly revisited history. What woman doesn’t get a gut twist when entering an official state building with its sacred line-up of old white guys?

Our country’s horrific treatment of Indigenous people throughout history and still today has become more glaringly obvious with continuing discoveries of mass children’s graves at residential schools. The Catholic church, which ran most of the schools under its doctrinal quest to, at best, assimilate Indigenous people, remains unmoved by calls for justice. It has refused to fully acknowledge its culpability in the lasting devastation to Indigenous children and families. It is dragging its feet on releasing historical records, refusing restitution and withholding a papal apology.

During the council debate about removing the Sir John A statue, Kingston City Councillor Wayne Hill spoke movingly about his own evolution of awareness.

“When I was four or five my father was the greatest man on earth. He towered over me and I thought he could do no wrong. By age 17, he seemed a little less flawless. Sill great in my eyes and continues to be but I had begun to see the world quite differently.

“In my forties, I also saw my father quite differently…He was a man like all other men with some great qualities and some failings. That’s where we are now in our national relationship with Sir John A.

“As a country and a nation we have matured. Our experiences and the truths that have been revealed have broadened our understanding. Instead of seeing Macdonald through a mythical construct, we now see him for what he was. His greatness was matched with some very significant failures that led to the death and suffering of many, many people.”

Photograph courtesy of The Whig Standard, Kingston, ON