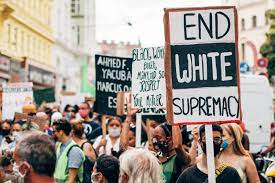 The unleashing of a virulent armed patriarchy

This summer, a 36-year-old man on a Tokyo commuter train wielding a knife injured ten people, including a young woman who suffered multiple wounds to her back and chest.

The man was open about his motive to police. “I have been wanting to kill a happy-looking woman for the past six years. Anyone would have been okay,” he told Japan news media.

Happy women — women with freedom, independence and a purpose — are a serious aggravation to some men.

They are deeply pissed off and dangerously so because they believe they’ve been robbed and cheated of what is rightfully theirs. In parts of the world closer to home, they are known as angry white men.

Their long-enjoyed white male privilege is invisible to them. In their eyes, women and minorities are not catching up after centuries of being on an uneven playing field; they have stolen the ball and are calling the shots. With baked-in expectations of what life owes them, they are blind to their advantages and unable to fathom the reality of true equality.

But any momentum behind male consciousness-raising was eclipsed the day Donald Trump took the oath and signed up for Twitter. Early in his presidency he dog-whistled his blessing to white supremacy militia groups and soon was outright embracing the terrorists as “great, peaceful” people. Emboldened by the nod from on high, the dudes with the piles of weapons and crazy, hateful ideas have been coming out of the deep woods and flaunting their newfound respectability in the faces of mainstream American.

We are seeing the unleashing of a virulent armed patriarchy intent on affirming white male power.

Current ultra-right, home-grown movements in the U.S. and Canada are motivated by hatred of government, minorities and women. The threat posed by women’s rights is primary. Uniting QAnon, ultra right Christians, and incels is their mission to reassert control of the reproductive and sexual lives of women.

And terrorist groups and individuals are popping up in the most unlikely places.

Known to many as ‘the Canada’ of the United States, Vermont is famed for its overwhelmingly liberal politics – even more so since the 2016 presidential campaign of Bernie Sanders, the state’s senator and self-described social democrat.

It’s the last place you would expect to find white supremacists.

But in 2018, Kiah Morris, the only African American female member of the state legislature, resigned after becoming the target of a well known white nationalist. She had already seen three other Black women relinquish leadership positions in the state because of harassment and threats.

Michael Shank, a teacher at New York University and owner of a Vermont animal rescue farm, recently posted on-line his intention to sell the property to be free of the assault weapon-armed bullies on his road. “There’s a movement metastasizing across America,” he writes. “It’s well armed, it’s extreme, and it’s led largely by white men … It’s everywhere, even in Vermont.”

So what about ‘real Canada’, where progressive politics, diversity and tolerance are integral to the national brand?

If Canadians once felt superior about their image of sanguine multicultural co-existence, they are less so now. In just the past four years, we have seen a 27-year-old male kill six worshippers and seriously injured five others at a mosque in Quebec City; a young male drive a van into pedestrians on Yonge St. in Toronto, injuring 16 and killing ten (eight of whom were women). The attack was regarded as “misogynist terrorism” when it was discovered that the driver was a member of incel, a group of men stuck on the idea that women are depriving them of sex that is rightfully theirs. There has been a sharp rise in discrimination against Asians since COVID-19, with reports of racist incidents more than tripling over the last year, according to a University of Toronto study. In June, four members of a Muslim family killed in London, Ontario were killed in what police have described as a “premeditated” vehicle attack.

Now in both US and Canada, domestic or homegrown terrorism, when citizens within a country turn on each other, is surpassing international terrorism. But legal systems have been slow to invoke the crime of terrorism in cases that originate on home soil. According to the Public Safety Canada 2018 Public Report on the Terrorist Threat to Canada, the vast majority of the 55 people charged with terrorism offences under the Criminal Code had committed international terrorism offences.

We are beginning to see more willingness by Canadian law enforcement to acknowledge attacks of domestic terrorism, including those against women. Last year, a 17-year-old Toronto youth and member of incel who fatally stabbed a woman in early 2020 is the first Canadian ever charged in connection with an “incel-inspired terror attack. (There has, however, been no terrorism charge in the case of the van driver, also connected to incel, whose attack on Yonge St. resulted in multiple injuries and deaths).

Terrorism changes were invoked in the case of the truck driver who targeted the Canadian-Muslim family, the first time antiterrorism law has been applied in an alleged act of Islamophobic violence. The man who killed a woman and injured two others in an attack at a Toronto massage parlour this February was initially handed murder charges. In July, police added a terrorism charge, after finding the perpetrator’s ties to incel.

Terrorism motivated by the ideologies of al-Qaeda and ISIS is understood. It’s time to redouble efforts to identify and aggressively prosecute homeland terrorists who use violence against women for failing to comply with patriarchal gender expectations and against minority groups for their perceived differences.