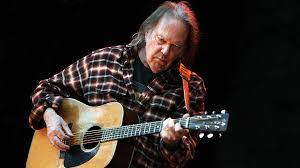 What would Neil Young do?

Musician and songwriter Neil Young continues to use his fame to do good. The man whose distinctive falsetto voice is like chocolate-included endorphins to the Canadian psyche, recently challenged Spotify to choose between him and Joe Rogan, the man whose podcasts pushes what Young calls life-threatening Covid misinformation.”

Spotify opted for pure profit when it made its mercenary choice this week to remove Young’s entire back catalogue from the well-known streaming platform.

It’s not the first time Young has weighed in on contentious issues, often at personal cost. He inflamed oil companies when he remarked that the oil sands in Fort McMurray resemble the Japanese city of Hiroshima after it was bombed. And he demanded an end to Trump’s use of Rockin’ in the Free World during his presidential campaign.

You can SPOT IF You’re looking more than a few good men out there who don’t hesitate to put a good cause before their own pocket book.